In 2015 and 2016, TEAM IMF Athletes were challenged to reflect on why they #RaceForMore, and then take a selfie with their reason to inspire fellow IRONMAN athletes. Check out all of the amazing, and touching, responses we received below. 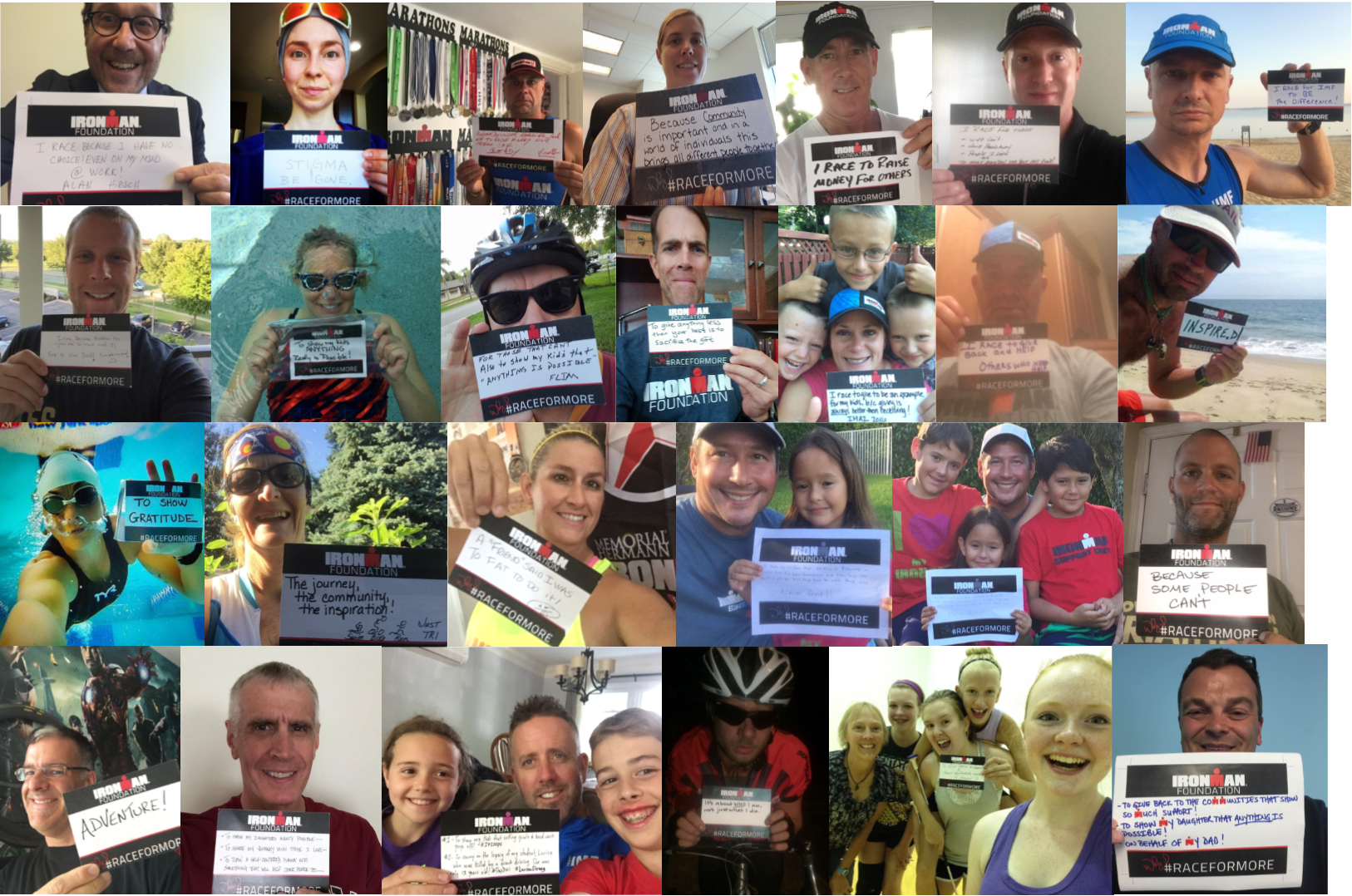 “I race because I have no choice. Even on my mind at work!”– Alan Hirsch
“Stigma be gone”– Alex Pierce
“IRONMAN Boulder heading your way to raise money for TEAM IMF”– Zvi Donat
“Because community is important, and in a world of individuals, this brings all different people together”– Christine Cooper
“I race to raise money for others”– Daniel Giblin
“I race for those who can’t, who have passed away, people I love, and to make every day the best day ever”– David Wilhite
“I race because triathlon has given me so much, and it’s time to give back”– Dustin Schmidt
“To show my kids ANYTHING really is possible!”– Erica Maynard-Uliasz
“For those that cant, also to show my kids that “Anything is Possible””– Fred Moore
“To give anything less than your best is to sacrifice the gift”– Jason Massie
“I race to be an example for my kids, because giving is always better than recieving!”– Jennifer Schifo
“I race to give back and help others who need help”–Joe Maggio
“To show gratitude”– Kristen Kastrinos
“The journey, the community, the inspiration!”– Kristine Reinhardt
“A “friend” said I was too fat to do it!”– Liisa Travis
“To show my children that anything is achievable no matter how big your dreams are, no matter how large the task might be; they have to work hard and never quit!”– Lorin Cone
“Adventure”– Penn Ketchum
“To show my daughters what’s possible, to share my journey with those I love, to turn a self-centered pursuit into something that will help other people too”– Rhett Bratt
“1) To show my kids that setting goals and hard work pays off! 2) To carry on the legacy of my student, Larisa, who was killed by a drunk driver. She was only 13 years old!”– Scott Cooper
“It’s about who I am, not just what I do”– Shawn Carter
“To give back to the community, and teach my students that anything is possible!”– Stephanie Felber
“I race for IMF to be the difference!”– Thomas Walls
“Because some people can’t”– Timothy Stamm
“Inspire.d!”– Victor Hall
“To give back to the communities that show us so much support, to show my daughter that anything is possible, and on behalf of my dad!”– Woody Freese 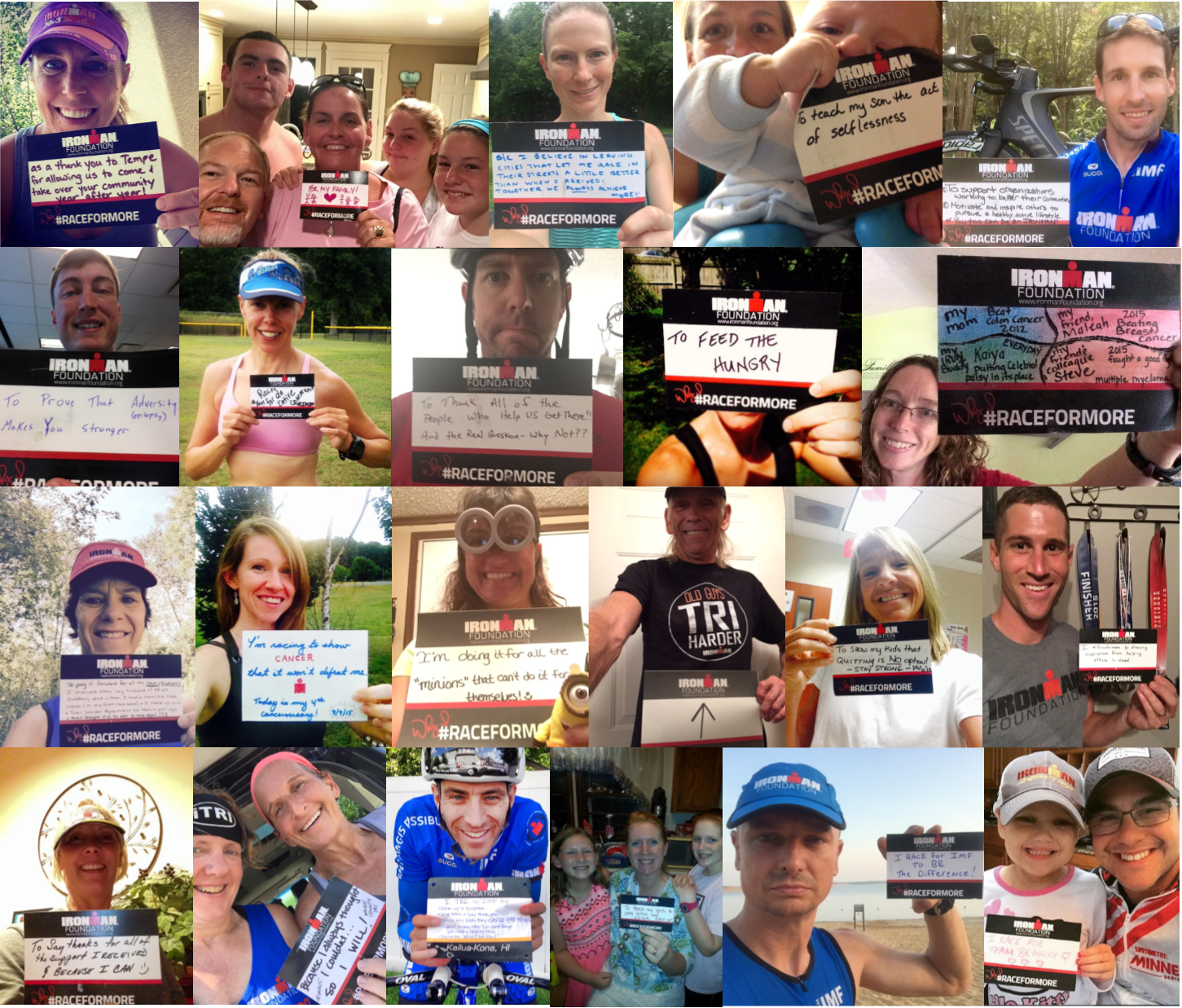 “For my family!”– Sheila Heistand
“Because I believe in leaving cities that let me race in their streets a little better than when I arrived! Together we always achieve more!”– Alicia Golden
“To teach my son the act of selflessness”– Amelia Grzyb
“To support organizations working to better their communities, and to motivate and inspire others to pursue a healthy, active lifestyle. You too, can be an IRONMAN!”– Ben Hess
“To prove that adversity (epilepsy) makes you stronger”– Chris Keating
“Racing for an entire community”– Constance Korol
“To thank all of the people who help get us there! And the real question…why not??”– Dan Mulligan
“To feed the hungry”– Heather Raymond
“My mom- beat colon cancer. My friend Maleah, beating breast cancer. My run buddy, Kaiya, putting cerebral palsy in it’s place. My friend and colleague, Steve, fought a good fight with Multiple Myeloma”– Jeanette Dunlap
“I’m racing to show cancer that it won’t defeat me. Today is my 4th cancerversary!”– Leigh Parker
“I’m doing it for all the “minions” that can’t do it for themselves!”– Maria Antocci
“To show my kids that quitting is no option! Stay strong- Phil 4:13”– Penny Koller
“I race for more by drawing inspiration from helping others in need”– Scott Foland
“To say thanks for all the support I received, and because I can!”– Stephanie Felber
“Because I always thought I could…so I will!”– Stephanie Kearns
“I tri with IMF to: race with a purpose, give back and say thank you, teach my kids that they CAN do hard things, to support those who do hard things but need a helping hand, and because “It will be fun!””– Stewart Harman
“To teach my girls to stay active, and never give up”– Susanne Allen
“I race for IMF to be the difference!”– Thomas Walls
“I race for Team Bravery”– Vahid Sadrzadeh